Are Men And Women Created Equal? 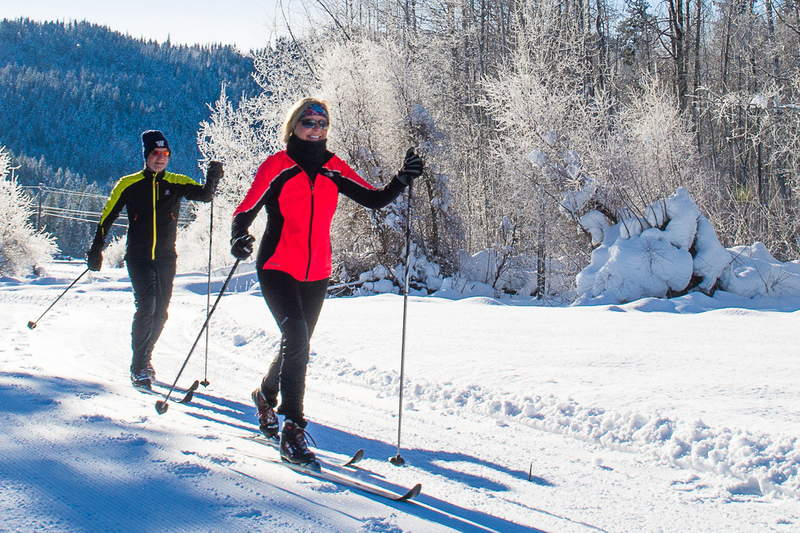 It seems as if the differences between men and women have been cataloged for centuries: the way we look, the way we act and even the way we drive, which is up for much debate. Some have said we come from different planets. But, putting political, sociological and sexual differences aside, are men and women really that different? It turns out that when it comes to the interior workings of our bodies — the blood, bone and muscle — not really. However, there are undeniable differences between us that set the genders apart in how we approach fitness, nutrition and health care.

“Women tend to under-emphasize the importance of strength training for long-term musculoskeletal integrity and bone strength, and men tend to do more extreme sports that make them more prone to injury. Of course, these are stereotypes and generalizations,” explains Dr. Dennis Lipton, a local internal medicine specialist. “The important thing for both sexes is to find something they enjoy and keeping moving!”

Here in Eagle County, the division between strength training versus cardio is less pronounced because of the outdoor activities we all enjoy, but as a generalization, it’s pretty fair. And think about it: When you walk into a gym, you tend to see more men in the weight area and more women on cardio machines and in yoga classes.

SO WHAT WE CAN WE LEARN FROM EACH OTHER?
It’s a matter of balance: To attain a high level of fitness and health, you need both strength training and aerobic training. For many men, that means adding more aerobic and conditioning training to routines; for women, it means adding in weight training.

“The focus in guys and gals isn’t any different,” says Dr. David Karli, a Steadman Clinic physician who specializes in physical medicine and rehabilitation and regenerative medicine. “We want a combination of strength training and aerobic training to get the best effect, but also to promote the most health benefits. You just have to look at lifestyle and what types of habits people have and then modify them accordingly.”

And for those women who might be worried about bulking up too much… don’t be. The different hormones in men and women will take care of that.

“I think one of the most obvious differences, but the one that contributes most to the differences between men and women, is the hormonal spectrum,” says Dr. Karli. “Men and women have totally different hormonal profiles, which dictate and, in some respects, control why a woman’s a woman and why a man’s a man. In terms of physical differences, men tend to be a little bit thicker, muscle-wise, than women because of higher testosterone levels.”

When it comes to exercise and exercise physiology, Dr. Karli says that both men and women’s bodies respond to the same stimuli, but they may respond in different ways. When men weight train, they tend to build muscle more easily than women. It’s not that women can’t build muscles like men, but because of the lower testosterone and higher levels of estrogen in women’s bodies, women just won’t bulk up like men.

YOU ARE WHAT YOU EAT
So there are some differences when it comes to how men and women work out and how that impacts our bodies. But what about what we put into those bodies?

Dr. Susie Vickerman, a family medicine physician at Colorado Mountain Medical, agrees. “Whole foods are important for everyone,” Dr. Vickerman says. “Reducing or avoiding processed carbohydrates and sugar would be a blanket statement where men and women are the same.”

But while it may be true that men and women need the same nutrition, several studies have shown that one’s gender often influences one’s food choices. According to the results of an extensive survey conducted by the American Society for Microbiology, in general, men are more likely to report eating meat and poultry items, and women are more likely to report eating fruits and vegetables. Another study, reported on by the Washington Post, shows that those choices might align with social, gender-based values. Luke Zhu, a co-author of the study, says “a growing body of evidence suggests that diners, consciously or not, associate healthy food with ‘femininity’ and unhealthy food with ‘masculinity.’”

It’s possible that this is a direct result of the fact that men simply require more calories than women do, and thus have more wiggle room when it comes to making food choices. But other factors likely play a role too.

“Women are more likely than men to be on diets and are more dissatisfied with their body weight and shape,” writes Rachel Johnson, PhD, M.P.H., R.D. in EatingWell. “One large survey found that, of those people who were a healthy weight, 23 percent of the women perceived themselves as overweight, while only 9 percent of the men did. … Men are obviously more accepting of their bodies and as a result seem to have a more relaxed approach about their food choices.”

“Nutritional habits are probably the easiest variable to change to improve health,” Dr. Karli says. “But it’s arguably the most difficult one to get people to follow.” His takeaway for both men and women: Vegetables are good, too many carbs are bad and we need lean protein in our diets.

HIS & HERS MENTAL WELLNESS
While much of health care deals with the physical body, mental wellness is just as important and greatly contributes to overall health.

According to the World Health Organization (WHO), depressive disorders are major contributors to the world’s health burden; they affect approximately 350 million people worldwide. A growing body of research indicates that psychiatric disorders are largely caused by a combination of stress and environmental, neurobiological and genetic factors. The study also concluded that women are nearly twice as likely as men to suffer from mental illness — not because of genetic factors, but because of gender and wealth inequality. These inequalities include (but are not limited to): domestic violence, sexual abuse, unpaid caring work, higher hours of work, lower social status and lack of access to reproductive rights and education.

While this study was conducted on a world-wide scale, the differences between men and women in regard to mental health tend to be more environmental rather than biological.

“Those (studies) really point to the way I see things clinically. So much is related to context for men and women that the actual effects of socialization kind of wash out at the clinical level,” says Dr. George McNeill, a local clinical psychologist.

Dr. McNeill says that there are so many factors that can impact the way men and women relate to the world, including how you’re raised and even gender expectations from the geographical area in which you grew up. But he says it’s risky to make generalizations like the idea that men don’t seek help as readily as women do, or that women more easily talk about their feelings — these are both false assumptions.

n addition to breaking down stereotypes, Dr. McNeill is also trying to change the way we think about mental health. Instead of the idea that men or women seek help because there’s a “problem,” he likes to help his clients develop a set of skills to deal with the ebb and flow of our emotions to enjoy healthier living.

“People come in and they say, ‘I just lost my job and I’m really anxious and I'm having a hard time sleeping and I don’t know what’s wrong with me,’” Dr. McNeill says. “I say, ‘Well, you’re completely normal. If you’re under stress like that…or you spend your life in a high level of stress, that would be horrible. There’s nothing wrong with you. So let’s figure out a way to manage it.’”

Whether you’re a working mother or a young man experiencing a break-up, both men and women experience stress, pain, fear, sadness. It’s how we manage our emotions that define each and every one of us uniquely — no matter our sex.

DISSECTING THE DOCTOR’S VISIT
It seems as if perhaps men and women aren’t very different at all — it’s simply how we respond to things like exercise, food and stress. But what about when it comes to our approach to health care?

We have different needs and our bodies go through different changes, but the actual need for health care and wellness is the same in both,”

Dr. Vickerman explains. Dr. Vickerman reports that in the past year, roughly 35% of the annual wellness visits in her office were conducted on men and 65% on women.

That lines up with data from the Centers for Disease Control (CDC), which indicates women are 33% more likely than men to visit a doctor to treat an injury or illness, and 100% more likely to visit a doctor for preventive health and annual exams. Unfortunately, the study also shows that Americans use preventive health services at about half the recommended rate. Preventive medicine takes a proactive approach to health care with the goal of maintaining well-being to prevent disease or disability. It’s why doctors encourage annual wellness visits, as well as screenings like mammograms and colonoscopies. Preventive care reduces health care costs and improves overall population health.

On the flip side, when patients come in with a variety of medical problems, the focus is more on treatment. Dr. Vickerman encourages patients to follow up with her to establish a relationship of care so that she can recommend diet and exercise routines, as well as lifestyle changes, that may enhance their lives.

“I would say that wellness is just as important for men as it is for women,” Dr. Vickerman says. “The focus may not be the same, but it carries the same importance.”

Both Dr. Vickerman and Dr. Lipton stress the fact that preventing disease and illness is preferable to treating it. Putting off doctor’s visits and ignoring your health may seem like an unavoidable situation when you’re dealing with other responsibilities like family or jobs, but it’s more harmful in the long run. Take care of yourself and you’ll be better equipped to continue taking care of others down the road — this is true for both men and women.

In the end, the question of whether men and women are created equally is a silly one. Of course they are — they’re just different! And just as you wouldn’t treat a 5-year-old in the same way you would a 50-year-old, those differences can be significant. But the need for a healthy mind, body and soul remains universal.