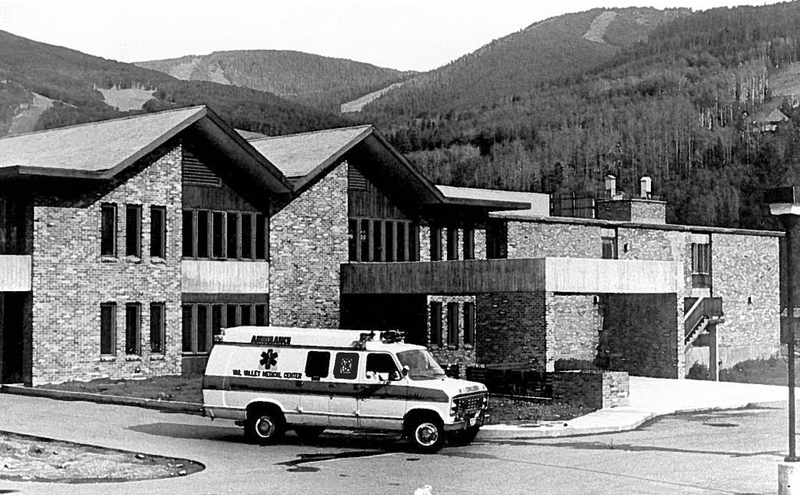 This article was first published by John LaConte at the Vail Daily on August 21, 2017.

As Vail Valley Medical Center prepares to unveil and celebrate its new, 72,000-square-foot West Wing expansion, its humble beginnings as a one-room clinic are a distant memory for many.

For Dr. Jack Eck, who arrived in Vail in 1971, the memories are vivid.

"We the doctors would drive what was a big station wagon as the ambulance, and take it home with us at night," Eck said. "We had to lay down next to the patient in the station wagon and take them with us. Now, we just immediately turn them over to the paramedics when we get them to the bottom of the hill."

If there was no medical clinic in town, then the Forest Service would not approve a permit for a ski area, so Vail's founders knew one could not exist without the other.

The clinic started small. When Eck arrived it was Dr. Tom Steinberg and Dr. Bill Holm taking on the bulk of the work.
Recommended Stories For You

"We didn't have pagers or cellphones, so you always had to leave your number wherever you'd be," Eck recalled. "If you decided to go out to a restaurant or out to a bar while you were on call, they just had to leave a number there with the clinic and one of the nurses would try to track you down."

After starting in what is now the kitchen of The Red Lion restaurant, the clinic moved to West Meadow Drive in the 1960s, where it remains today. Eck spent a good part of his life there.

He moved there in 1979 as the hospital was completing construction on a new wing, allowing it to accommodate obstetrics, general surgery and orthopaedics. By 1980, the clinic had changed its name to Vail Valley Medical Center and had 25 full-time physicians on staff. But while that time marked the biggest step forward in health care for Vail, with the clinic becoming a full-service hospital, it was also one of the most tumultuous periods in the medical center's history, Eck said.

Around the year 1980, the clinic had stopped making payments on some of its outstanding bonds, Eck said.

"The clinic had the only ambulance, and people just didn't pay ambulance bills," Eck said. "So we defaulted on some notes and the state was going to shut us down. We were going to lose our certificate."

If the clinic shut down, then it wouldn't be long before the Forest Service shut the ski resort down, perhaps only a matter of days. Eck, who was helping the ski patrol at the time, alerted patrol to the problem.

"We called a meeting of influential people in town," Eck said. "It was on a Sunday morning at Donovan's bar, that's where all the patrol guys hung out, now Vendetta's."

It was the only meeting place they could think of, Eck said.

"When they heard the story, people started stepping up and giving us some money, and that really turned it around," Eck said. "It seemed like every time we really needed something, we could somehow find someone to step forward and do it."

One of the people still active in Vail who was able to step forward a few times and help out in those days was Sheika Gramshammer. She had become a friend of the clinic over the years, dating back to the days when there was no waiting room and patients would be sitting outside in the snow to see a doctor.

"Some of the locals would be walking by and feel sorry, and they'd give them a little schnapps or a little wine to ease the pain," Eck recalled. "Sheika and Christie Hill were the two big culprits."

When it came time to expand into surgery, the clinic needed a new defibrillator for the intensive-care unit. While Gramshammer, a native of Austria, struggled with the correct pronunciation of the machine, she had no trouble raising the funds to purchase it. It was the medical center's second defibrillator. Now, nearly 40 years later, Vail Valley Medical Center has made it a mission to make Eagle County the safest place in the United States to experience a sudden cardiac arrest, funding 50 additional defibrillators in the community.

In 1985, Doris Kirchner arrived at Vail Valley Medical Center as an obstetrics nurse manager. She would go on to become the medical center's president and CEO.

An abundance of fond memories were created along the way, Kirchner said.

Many of those memories stem from her time on the mountain with Eck, teaching basic EMT skills to the ski patrol.

"On a very cold and wintry day in the winter of 1986 … I hauled a model of a placenta to the upper patrol headquarters with many pairs of plastic gloves, posters and visuals for a mock delivery on the mountain," she said. "I asked for volunteers to check the umbilical cord attached to the placenta for evidence of three vessels, along with demonstrating how to clamp the cord. It was a real experience to see these macho patrollers handling a placenta.

"Needless to say, they learned a lot that afternoon. However, the table was eventually turned when the patrollers asked me to assist on a ski wreck on the mountain. They handed me a tow rope, allowing them to pull me across the mountain on the snow on a snowmobile. Whoa! Whoa! Whoa! They failed to instruct me how to drop the rope and slow down; I was almost their next wreck. They had a lot of chuckles on that run. All in all, strong relationships were built between VVMC nurses and ski patrollers."

"It was very exciting to learn about Dr. Steadman's ACL reconstruction technique," Kirchner recalled. "It was fun to be part of the clinical team working on such an important project that would forever change the culture and integral parts of VVMC."

Through many months of discussion and planning, Steadman decided to relocate his practice to Vail in 1990. The hospital added four new operating rooms and patient rooms to accommodate the additional patient volume. In his first year at VVMC, Steadman performed more than 400 surgeries.

"Today, because of the growth of the two orthopedic practices in the valley, VVMC has been able to grow from a small rural hospital to a medical center offering trauma care, invasive cardiac services, a level II nursery and many other high-quality and high-level services," Kirchner said.

On Tuesday, the Vail Valley Medical Center will unveil its now-completed West Wing in a private celebration with members of the community. The remodel contains a new, 24,000-square-foot fourth floor for The Steadman Clinic and research space for Steadman Philippon Research Institute, which was unveiled earlier this year.

Also completed and already benefiting patients is the cardiac catheterization and electrophysiology lab, where cardiologists can see and repair the arteries and chambers of the heart; a new intensive-care unit with five new rooms for acutely ill patients who are unstable, in critical condition or needing very intensive nursing care; a new patient-care unit with five new private rooms for sick, injured and recovering patients to stay under hospital care for short or extended time periods; an expanded surgical services suite with a new pre-operative and post-operative recovery wing; and expanded, state-of-the-art space for Howard Head Sports Medicine.

The West Wing expansion and remodel is phase one of the medical center's Master Facility Plan. Phase two, the 350,000-square-foot East Wing, will take place from 2017 to 2020 and include a new, state-of-the-art 24/7 Emergency Department; a relocated helipad on the medical center campus with direct access to the hospital, increased parking capacity, a new main entrance off South Frontage Road, a new pharmacy and a new imaging/radiology department.

In thinking about it all, Kirchner is proud to say the compassionate and competent care that she has seen provided to each patient at Vail Valley Medical Center has been consistent throughout the years.

"Even though it was a quieter time in the 1980s and 1990s, the ground work was laid by those board members, medical staff, employees and community members who had the vision of building strong medical care for locals and visitors that would be sustained into the future as a strong independent medical provider in a tremendous community," Kirchner said. "We should never forget that people make the difference in all we do."