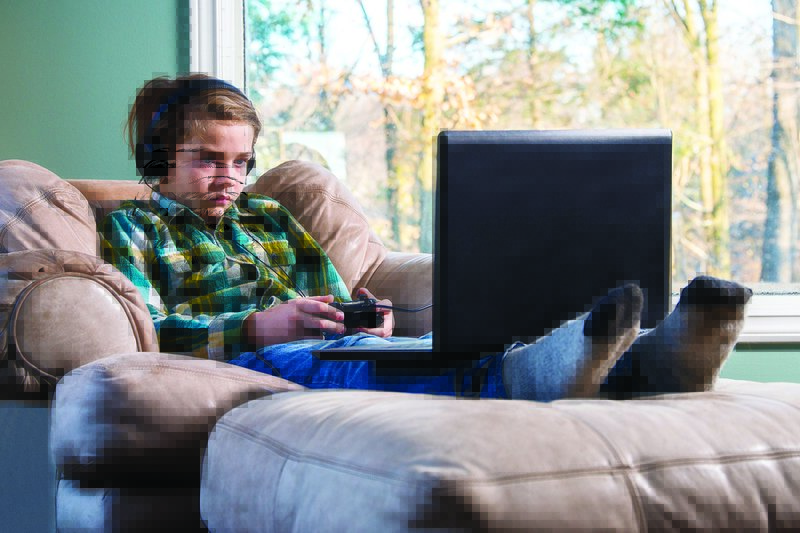 This article was written by Heather Hower and printed in the 2018 Vail Health Magazine.

Once upon a time, children played outside until dark and families entertained themselves with games, books and conversation.

Today, parents struggle with limiting screen time to make sure their kids are getting fresh air, human interaction, nourishment and some exercise in between their video games, online chats and binge-watching TV.

It seems almost daily we see a new headline denouncing technology, casting blame for myriad ills from attention deficit hyperactivity disorder (ADHD) to depression and anxiety. Technology, with its potential for doing good, can also cause harm to youth who have the World Wide Web at their fingertips. It can create negative feelings well beyond “FOMO” or Fear Of Missing Out. And yet a caveat: Where do we read these articles, find the newscasts and hear the stories? Online.

All of us — youth, millennials, GenXers, baby boomers — have a love/hate relationship with devices. Panic sets in when we realize we might have left our phone at home. Checking our email feels both obsessive and necessary. And though we might recognize the wisdom of occasionally turning off our phones, our devices don’t seem to be going anywhere.

The iPhone was released in 2007. The pervasiveness of technology is a relatively new and fast-moving phenomenon and its effects on the brain are still being studied.

Recently the World Health Organization recognized gaming disorder as a mental health condition, while the Journal of the American Medical Association (JAMA) asserted that frequent use of social media by adolescents may increase their odds of developing symptoms of ADHD.

In 2016, the National Institute of Health shared a study that focused on social media usage by young adults. The conclusion was that social media use was “significantly associated with increased depression.” It further noted, “It may also be that those who use increased amounts of social media like Instagram, Snapchat or Facebook subsequently develop increased depression. Multiple studies have linked social media use with declines in subjective mood, sense of well-being and life satisfaction.” And so Pew Research Center’s data that assert “95 percent of teens have access to a smart phone and 45 percent say they are online ‘almost constantly’” does not sound like good news.

Colorado Mountain Medical Pediatrician Dr. Janet Engle sees the negative consequences unfolding right here in Eagle County with increased behavioral problems, “worsening attention deficit disorder, more ADD; just temper tantrums. Kids are acting addicted,” she says. “Understand that a lot of social media and technology are designed to be addictive, and we are letting our young children — who have more pliable brains — use these things. We really don’t know how bad the repercussions can be.”

“Early or excessive smartphone use in youth has been linked to a number of negative outcomes, including sleep difficulty, distraction and anxiety,” observes Dr. Casey Wolfington, a licensed psychologist and clinical director for Bright Future Foundation. “For victims of bullying, a smartphone may become a means of inescapable cruelty.

For some, it seems that social media has become intrinsically tied to one’s sense of self-worth. I think it is incredibly concerning when people of any age begin to base their self-worth and value on likes, followers or views.”

Technology is also a concern for clinicians at Mind Springs Health. They say that kids in general spend more than 50 hours in front of a screen every week. “The media content they consume and create has a profound impact on their social, emotional, cognitive and physical development.”

During those hours online, children encounter a dizzying array of information. Their brains are not developed enough yet to process it all, and those images of friends at parties, for instance, can cause stress, anxiety and depression. Mind Springs Health succinctly states in its literature: “For our kids, the online world and the ‘real’ world are all the same thing.”

That means youth start obsessing over “likes” or getting points in games, explains Dr. Engle. “Starting in middle school, that’s the age when they start using social media more.” Social media is designed to take advantage of kids’ need for approval in different ways. “People have no idea how much time they are spending on social media or video games,” she adds.

It’s a need to hunt that releases dopamine and makes us addicted to social media. Kent Berridge in Psychology Today explains that “with the Internet, Twitter and texting, you now have almost instant gratification of your desire to seek… It’s easy to get in a dopamine-induced loop. Dopamine starts you seeking, then you get rewarded for the seeking, which makes you seek more. It becomes harder and harder to stop looking at email, stop texting or stop checking your cell phone to see if you have a message or a new text.”

It’s that very fact — the hours spent scrolling through image after image — that inspired Eagle Valley Middle School students to take on the “Disconnect to Reconnect” challenge. The pledge was inspired by the No Place for Hate student group, explains Kayleen Schweitzer, the school counselor.  The school already has a no-phone policy, but this challenged students, and some parents, to take a full technology break for a week.

Schweitzer acknowledges it is hard to measure the exact results, but the students were asked to provide insight on their time away. She shares that the kids noticed they felt like they had more time since they weren’t spending an hour, or more, each night surfing random sites. Although, she is quick to note, it’s not only youth who scroll and log in. About 30 parents participated too and they shared that they were more present with their kids and felt more engaged.

“The majority are on social media. I wanted people to see how often they’re on it and what positives could come from limiting social media,” Schweitzer says. “It’s about taking control back because it becomes a habit and they get so into it.”

Schweitzer sees what the Healthy Kids Colorado Survey (HKCS) confirms: According to the 2017 survey, 31 percent of middle school and 28 percent of high school students played video or computer games, spent time on social media or used a computer for something that was not school work for three or more hours on an average school day; 49 percent of middle and 46 percent of high school students reported three or more hours of total screen time daily. That is a lot of time comparing one’s life to another’s; a lot of time spent being inactive.

This was the first year screen-time type questions were asked — the Eagle River Youth Coalition surveys every child in seventh through twelfth grades every other year.

Friend or Foe
Despite dire warnings and feelings of misgivings, technology is here to stay. Students use computers for schoolwork, they text their friends and scour social media for funny videos and memes. It’s with this in mind that Carol Johnson, a mother of three and community education manager at Eagle River Youth Coalition, urges parents to be realistic, yet involved, in the whole process.

“I think it depends on your family values. When your child is ready — and only you can determine that — you teach them to be a good digital citizen. This takes work. It happens in 5th grade, or 12th grade, whenever you decide to give your child a phone,” Carol says. “One way to ease into it, is to start with a flip phone and a short list of rules that promote responsible behavior. If after, say, six months, your child is rocking it, you can upgrade, if your budget allows, to a smartphone. With that change, a whole new set of rules needs to be implemented. Constant monitoring is required….think of it as an added duty to your job description of being a parent in the digital age.”

“It is important for parents to be actively involved in all aspects of a youth’s life,” she says. “Smartphones and social media accounts are no exception. If I could give parents any advice regarding this topic, it would be: Be involved, be curious."

She urges parents not to assume they understand what social media means to their children.

“Ask your child to show you how their apps work. Have them set up an account for you,” Dr. Wolfington advises. “Discuss their favorite apps and posts and attempt to explore what draws them to that app.”
These discussions shouldn’t simply happen in response to a specific issue or concern, but as an ongoing conversation that is a part of daily life.

“Be open and curious,” Dr. Wolfington says. “It is incredibly important to become an active participant in your child’s social media life before you have a concern. People of all ages are more likely to openly share information when they feel safe and supported. If a parent only asks about social media during times of upset or in response to a specific incident, they will likely only obtain very limited information and perhaps close the door to future communication.”

Some parents limit their children’s social media activity until they reach a certain age or grade. But that doesn’t mean they should avoid the topic. Dr. Wolfington urges parents to discuss their reasons for this with their children.

“I always like to encourage discussion, rather than  explanation,” she says. “Discussions are collaborations where children are encouraged to partake and express themselves.”

Screenagers, a documentary that has been shown several times throughout the valley, explores teens’ digital footprint and their burning desire to be connected. It showcases youth who are addicted to gaming and those who get a phone for the first time. In it, Dr. Delaney Ruston shares her family’s conversations around technology use and what worked for them — a contract that spells out what her children can do on their phone (social media or not, games, or just phone calls), how much time they can be on it and making sure it’s age-appropriate.

Dr. Wolfington reminds us that social media isn’t all bad.

“Social media has allowed youth with chronic illness, certain disabilities and/or overwhelming anxiety a venue for social engagement and support,” she says.

While it’s still a nebulous field — how much is too much? what’s appropriate? what age is the right age? — experts all seem to agree: No phones in the bedroom and take conscious breaks from the phone.

Because as much as we may enjoy a break from our devices to take a ski run or snuggle on the couch with our loved ones, the moment the phone dings or an email comes through, we are right back on them.