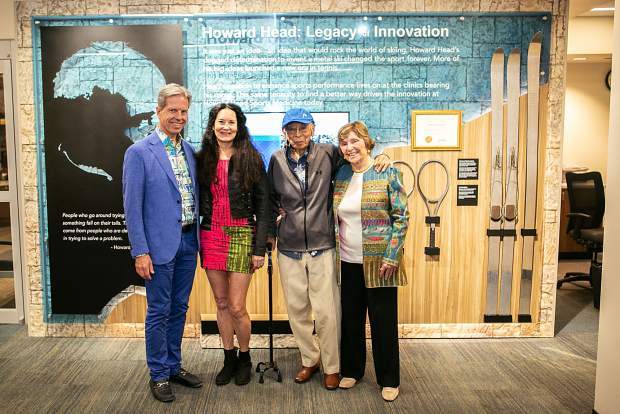 This article was written by John LaConte and printed in the VailDaily on 8/27/18.

VAIL — Howard Head made as big of an impact locally as he did globally.

After shaping the future of recreational skiing and racket sports with his inventions, Head's name went on became synonymous with sports medicine here in Eagle County after he and his wife, Marty Head, made a donation in the 1980s which enabled Vail Health to build Howard Head Sports Medicine.

Marty still lives in Vail to this day. On Thursday, Aug. 23, Marty and Vail Health celebrated the opening of a new Howard Head exhibit in the medical center's west wing.

Joe Illick and Gina Browning made the gift to cover costs of producing the exhibit, which showcases the innovation of Howard Head the man, as well as Howard Head Sports Medicine.

Yosh Nakagawa donated the sports artifacts on the display, including tennis rackets and copies of the aluminum laminate skis for which Head became known.

Nakagawa was one of the first in the U.S. to recognize the commercial potential of Head's aluminum laminate skis.

"In the '60s, when (Howard Head) first came out with a prototype, he came to the Northwest to have us try this ski out," Nakagawa said. "He said this will make it easier for people to ski."

That was all Nakagawa needed to hear. He went on to become the leading Head salesperson for two years running, selling about 5,000 pairs of skis annually at Seattle-based sporting goods chain Osborn and Ulland.

The historical significance of the museum-style exhibit struck a chord with Nakagawa.

After retiring from Osborn and Ulland in 1995, Nakagawa went on to dedicate his life to history and civil rights.

A survivor of the Minidoka concentration camp in Idaho, where he was imprisoned for several years as a child, Nakagawa says society can only learn from its mistakes if it's aware of its history.

"I was 10 years old, so I understand what's happening today," he said. "I never thought I would live long enough to see it happen again."

Nakagawa said being the age that he is — born in 1932 — he was both old enough to remember what happened to him and his family in 1941, and young enough today to have the mental wherewithal to draw comparisons between his family's situation and the situation surrounding families that have been separated and detained at the U.S. border.

"Many of my friends never saw their father or mother again," he said. "I don't want it to happen to your children."

However, Nakagawa said people should not dwell on the negative events of the past in their attempts to shape the future.

Head's achievements, as told by Nakagawa, are among those good stories.

Nakagawa said while Head was barely aware of the significance his actions would have, he impacted history in a much more meaningful way than making tennis and skiing easier for people.

Head also had an impact on the American civil rights movement, Nakagawa said on Thursday, through his work with himself and African American tennis great Arthur Ashe.

"It took a man like Howard to elevate Arthur Ashe, who couldn't walk into the tennis clubs when his name was on the racket," Nakagawa said. "He took a person that came out of the concentration camp, and he honored them as a skier."

The new Howard Head exhibit at Vail Health also contains a ski, signed by Head, which recognizes Nakagawa for his achievement in becoming the top selling Head skis salesperson.

The exhibit is on the first floor of the medical center near the main entrance and has been an eye catching exhibit for everyone who walks past, said Vail Health Foundation President Dan Pennington.

Pennington said in the coming years, guests may see Vail Health install more exhibits in an effort to make the waiting areas more interesting for the guests of patients.

"When someone gets hurt on the mountain, they don't come to the emergency room by themselves," he said. "Now you've got something to interact with, and you can learn more about what the different programs are like."