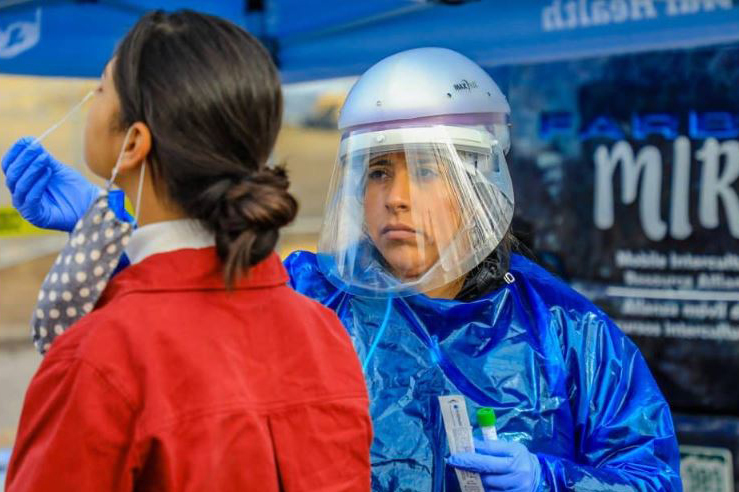 Colorado Gov. Jared Polis called for a moment of silence on Friday as the state mourned the more than 1,000 people who died with COVID-19 in Colorado. Eight of those deaths came from Eagle County, where the case fatality rates are currently the lowest in the nation at less than .15 percent.

Vail Health estimates 6,300 people or 11.5 percent of the population has had COVID-19 in Eagle County based on a sample size of the 3,400 people who have received antibody tests. That is the largest sample size of anywhere in the country, said Chris Lindley with Vail Health.

“We feel very confident that the underlying presence in our community of individuals with antibodies is 11.5 percent, and that number is not going to change,” Lindley said last week. “I guarantee you if we test another 1,000 people, it will be within another plus or minus one percent of that. This is a very, very large sample size, we have extreme confidence in it.”

Of course, the fact that Eagle County leads the nation in both percentage of the community tested and lowest death rate is no coincidence. While the area’s low obesity rate and general healthiness does contribute to the low death rate, the high testing capabilities play a larger role, as case fatality rates are based on the number who have died divided by the number who have tested positive.

Other areas aren’t able to use as large of a denominator in that equation, Lindley said.

“They have not tested extensively enough to be able to estimate how many people have had it,” he said.

“(Colorado must) report, under federal guidelines … the number that have had COVID and died,” Polis said Friday. “I have joined in asking the department to report to the public the people that have died from COVID-19 … What the people of Colorado want to know is not who died with COVID-19, but who died of COVID-19.”

The state announced a change in its reporting method on Friday to list both the people who died with COVID-19 and the people who died from COVID-19. While Polis thought the “with vs. from” distinction would not make a big shift in the numbers, the opposite proved to be true as the distinction revealed a more than 25 percent drop in the number of deaths from COVID-19.

A few hours after Gov. Polis announced the event to mourn what he thought was more than 1,000 people who had died from COVID-19, that number was reduced to less than 900 people. As of Saturday, the death toll of victims who died from COVID-19 was 878, while 1,192 people had died with the disease.

Prepared for the worst
While Eagle County’s fatality rate is low, it doesn’t mean locals should not expect to see dozens of deaths to occur over the next two years.

With an estimated 11.5% of Eagle County locals already infected at some point, another 55- 60% need to survive the disease, or receive a (yet-developed) vaccination, before herd immunity is reached and the virus can no longer spread. This could take 18-24 months, Lindley said.

And while Polis frequently said the time Coloradans spent in quarantine was in an effort to help hospitals gear up for high caseloads and future surges in spread, at Vail Health the time was well put to use, Lindley said.

“And we have an eight-week supply of PPE on hand to handle the worst of the worst surge that we can model, which would be filling up every hospital bed,” Lindley said.