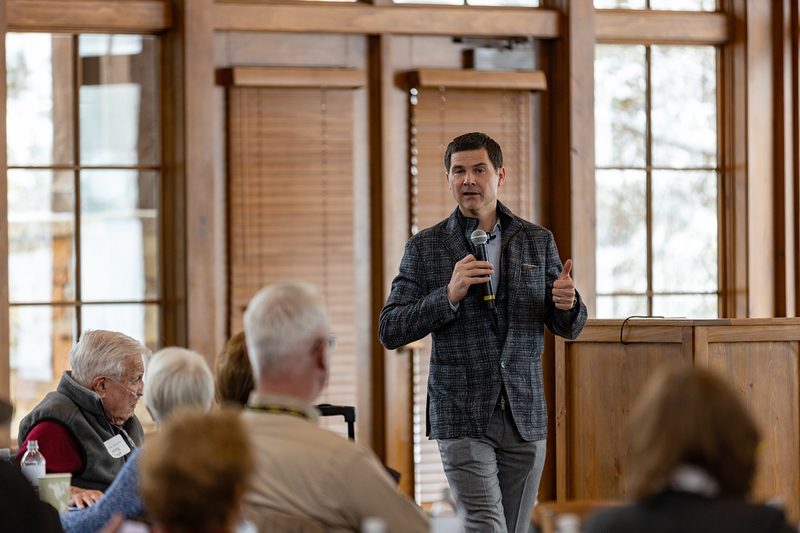 This article first appeared on Vaildaily.com on February 7, 2020 written by Scott Miller.

Will Cook has a lot of information in his head, and he’s happy to share it.

Cook, the CEO of Vail Health, spent about an hour Thursday providing a load of information about the hospital and its subsidiary operations to an almost-full Donovan Pavilion. It was the first of two Thursday sessions about the state of Vail Health.

This was Cook’s second state of Vail Health presentation. The first came when he’d only been on the job a matter of days. Now, with a year of work and learning under his belt, Cook turned the information spigot to full blast.

He noted that when he started, he knew Vail Health needed better outreach to the public, and the facility had what he called a (public relations) dilemma.

“Until you’re out and about (in the community), you don’t really have a full appreciation” of the job ahead, he told the audience.
Pulling together
But, he added, “I also didn’t have an appreciation for … how well this valley can come together.”

The prime example, he said, is with behavioral health. A plan begun before Cook took the job has started to see real progress, he said. That plan, which got its first funding with a tax on retail marijuana sales passed in 2018, got a big boost when the board of directors for Vail Health in 2019 agreed to a $60 million commitment over 10 years.

That professional will then stay for a time with the person in crisis, dramatically cutting the need for someone to end up in the hospital’s emergency room or in a jail cell, waiting for transport to a facility in either Grand Junction or the Denver area.

“We’re not there yet … it’ll take 10 years,” Cook said of the valley’s behavioral health plans. “But we’ve got a plan and we’ve got community partners.”

Cook said partnerships will be key to many Vail Health initiatives in the coming years.

Under the current system, there are five behavioral health specialists working with Colorado Mountain Medical. Those specialists have already seen more than 300 patients, thanks to a questionnaire and referral system.

At his talk on Thursday night in Eagle, at the Brush Creek Pavillion, Cook said those specialists are referred to as a “warm handoff.”

“So if someone is in with their primary care physician and they say, ‘Hey, man, I’m having anxiety or I’m having trouble sleeping,” instead of saying, ‘Well, here’s a script for Zoloft,’ they’re saying, ‘Hang on, we’ve got someone down the hall.'” Cook said. “And we actually don’t schedule patients into them. They sit there. That’s the most unproductive, expensive thing we could possibly do. But we’re doing it because if you don’t grab them in that moment and put them with somebody who can do a full analysis and understand that, well, maybe this person maybe doesn’t need to be treated with a medicine, maybe you just need to have behavioral health therapy and talk to somebody, maybe there are social issues driving it, and what you really discover when you peel that proverbial onion is they’re struggling to make ends meet.”

Cook said cutting hospital visits is one way to control costs. Finding a potential problem before it becomes an emergency is far less expensive.

Part of keeping more patients in the valley involves lowering prices on many procedures, including MRIs.

That’s required a change in thinking for some board members, Cook said. While Vail Health’s reserves are healthy today, Cook said it hasn’t been that long since the business had only a few days’ cash on hand.

After Cook’s presentation, several people asked questions, ranging from the future of the bank building — currently Colorado Mountain Medical’s Vail office — and the prospect of Vail Health-provided transportation for patients.

On the bank building on Vail’s South Frontage Road, Cook said the ultimate future of the structure will be determined in the next three to five years. In the immediate future, the building, which is owned by Vail Health, will probably be converted to non-medical uses. It may be razed and replaced in the longer term, though.

Cook said there are no current plans to provide patient transportation, but added it’s something for the management team to look into.

Responding to another question, Cook said the new east and west wings of Vail Health hospital will also allow the facility to take steps to become a more environmentally friendly operation.

Efficiency is part of the reason the facility’s up-front costs are so high, Cook said.

At his talk in Eagle, Cook also addressed a question from a man who wondered if the push to bring 50 behavioral health professionals to the valley was putting an emphasis on quantity over quality. He questioned whether it would also lead to professionals trying to prescribe their way out of a crisis.

Cook answered by saying the current behavioral crisis is like a fire burning on the side of the mountain.

Valley residents Judy and Keith Countryman both volunteer at the Shaw Cancer Center. Both said they were impressed by Cook’s presentation.

Keith Countryman praised Cook’s honesty, saying he was glad to hear the Vail Health CEO acknowledge that an issue hadn’t been fully figured out yet.

“And the fact that he can present (information) in such a human way is impressive,” Countryman said.