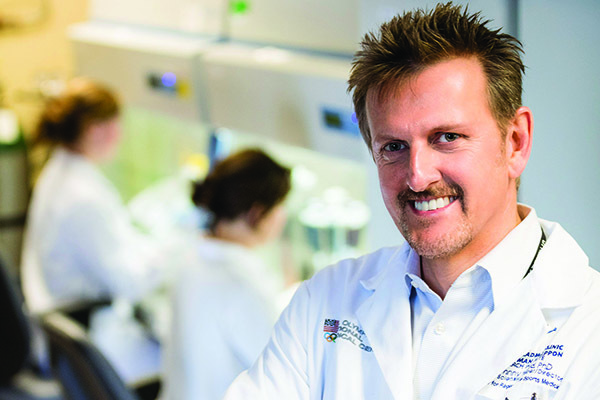 This article was first printed in the 2019 Vail Health Magazine.

The number of people age 90 or older will quadruple between 2010 and 2050. But what’s the point of living longer if you’re burdened with disease and degeneration?

Not much, which is why Johnny Huard, PhD and other scientists have been studying healthy aging for 25 years. Dr. Huard is the chief scientific officer and director of the Center of Regenerative Sports Medicine at Steadman Philippon Research Institute, and he and other researchers may have found the key to slowing the effects of aging and helping people recover from injuries, illnesses and degeneration. After decades of clinical trials, scientists finally understand why people age at a cellular level: essentially, our stem cells become dysfunctional, less active or “tired,” as Dr. Huard explains it.

DIET AND EXERCISE
Dr. Huard asserts that healthy aging relies on five pillars: healthy diet, lifestyle, personalized medicine, regenerative medicine and prescription medications. Each of these five fundamentals contributes to supporting healthy stem cells. These interventions won’t transform a 50-year-old into a 25-year-old, but they can assist that older person in aging much better from age 50 on.

“Nutrition is vital. Eat less and live longer,” Dr. Huard says, adding that studies have shown the combination of a ketogenic diet, moderate calorie restriction and 14-hour fasts between dinner and breakfast increase health span in humans and lower risks for diabetes, cancer and aging in general.

Stem cells originate in blood vessel walls, so exercise is important because it increases vascularity, which results in more stem cells and, ultimately, faster healing and slower aging. He recommends a moderately to intensely active lifestyle.

But obviously, diet and exercise alone don’t prevent stem cells from eventually dying off. As it turns out, other cells in the body, called senescent cells, drive inflammation and literally turn healthy cells into dysfunctional ones by producing molecules that disturb the function of neighboring cells. So, the question becomes: Can we stop these nasty senescent cells?

SUPPLEMENTS
Studies show we can, and that’s where personalized medicine, regenerative medicine and medication come into play.

Dr. Huard begins with personalized medicine: He tests blood for a host of markers most doctors don’t routinely look for, including vitamin E, hormone, mineral levels, heavy metals, etc. Once people bring their blood markers to baseline readings, he recommends the next two steps: regenerative medicine and medication.

In a study of mice with progeria (accelerated aging and its related, debilitating symptoms), mice injected with 500,000 young stem cells lived three times longer with significantly better health than noninjected mice. Another study showed that young mice receiving blood from old mice aged prematurely, and old mice receiving blood from young mice slowed down their aging process; these old mice also suddenly possessed rejuvenating factors, including the ability to fight Alzheimer’s disease. And, the results seem to transfer to humans, too. Dr. Huard asserts that, on average, women (and female animals) live longer than males because more women than not become pregnant and benefit from the young stem cells of their fetuses, women who become pregnant between age 40 and 50 age slower and achieve extreme longevity, he says.

“Your stem cells may prove someday to be a lifesaver,” Dr. Huard says, adding that the best gift parents can give their baby involves “banking” the stem cells in the umbilical cord. “Stem cell banking is the best investment you can make in your life.”

The process of banking usually involves extracting 10 cc of fat and freezing the stem cells. Dr. Huard began banking his a year ago.

However, a few major sticking points still exist. First of all, there are companies who take people’s money and don’t follow the proper banking procedures, Dr. Huard says. The cost to bank stem cells is approximately $6,000 to $7,000, but that amount only covers the actual banking process; getting stem cells re-injected into the body costs much more. And, the main problem in this nation is that the FDA has approved the removal and freezing of stem cells, but it hasn’t approved injecting them back into the body.

The FDA wants to ensure scientists growing stem cells have mastered the technique because “a lot of things can go wrong,” Dr. Huard says. Still, other countries such as Germany and Mexico regularly grow and re-inject banked stem cells into people. Dr. Huard and others are committed to educating the FDA about how they have discovered safe ways to grow the necessary amount of stem cells. Perhaps in the future, we will not need to grow all stem cells if we know in advance the cells that are the best for healthy aging.

Ultimately, Dr. Huard sees a day where stem cells are banked at birth, or at least banked prior to soldiers being deployed, astronauts launching into space and diseases progressing. Banked, younger stem cells can help those astronauts counteract high radiation exposure, help the wounded warriors heal and save older people from age-related degeneration. Though stem cell research suggests profound breakthroughs, it’s important to remember that it’s not the only intervention necessary for healthy-aging effects; diet, exercise and personalized and regenerative medicine all play a role.