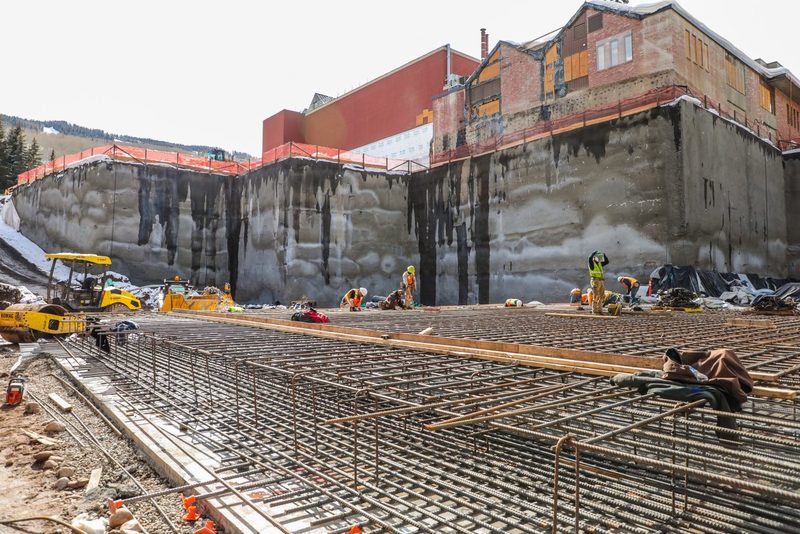 This article was printed in the Vail Daily on February 23, 2019.

VAIL — Hitting bottom is usually a bad thing, unless you then start to build a large structure at the Vail Health Hospital.

To build the east wing of the hospital — which will include the hospital’s new emergency department, an enclosed loading and delivery area, five parking levels and a helipad — construction crews from GE Johnson Construction Co. first had to dig a really big hole.

As much as 1,000 cubic yards per day of material was removed from the site while the digging took place. Much of the soil went to Bond or Gypsum. Other materials from torn-down structures were recycled.

Crews got to the bottom of the hole in December and are now working on bringing the new structure out of it.

Getting the hole dug was no simple task.

Soil nails — long stakes that were driven into the walls of the hole — are required to ensure that the walls stay where they’re supposed to.

In addition to ensuring the integrity of the hole, crews have also had to construct a plumbing system to take groundwater off the site. The water table on the site is only 28 feet below ground level. That means there’s a lot of water to remove from the site.

Brett Tyler, Vail Health’s senior project manager on this project and one of three owner’s representatives, said roughly 1 million gallons of water per day is being drained from the site. That water is filtered according to state standards — with frequent checks — then sent into Gore Creek.

There’s a tradition in construction to celebrate when the top of a building is up. The same tradition holds when a big hole is finished. Workers were treated to lunch during the December bottoming out ceremony. T-shirts with significant project facts and figures were handed out, too.
Bottoming out, building up

Since December, roughly 60 people have been working to get that big hole ready for constructing a building.

The amount of concrete needed for the structure’s base is vast. In fact, a major pour at Vail Health will require virtually every truck in the area to run to Vail and back. Trucks come from as far away as Basalt for a major pour. On Feb. 12, there were 60 concrete trucks in and out of the site. That isn’t unusual if the weather cooperates.

There isn’t room at the site to linger since access is from West Meadow Drive. That means trucks come to the site, empty their loads, then head back for more. If full trucks start to stack up, they’re parked on Vail’s South Frontage Road. Flaggers help separate vehicles into and out of the site from the pedestrians and cars on West Meadow Drive.

Once a pour starts, it doesn’t stop. And, Clem said, the weather has to cooperate.

Pouring concrete in the winter can be a tricky business. Tyler said the material’s structural integrity can be compromised if it freezes before it’s fully set. To protect the pour, heated blankets are used to cover the poured material until it’s fully set.

To save time — and time is money in the construction business — the project will use more than 1,000 pre-cast concrete building blocks to build the walls of the structure.

Those blocks are being manufactured now in Colorado Springs and will start coming to the job site in late March.

Tyler said without using the pre-cast blocks, construction would be delayed until mid to late April at the earliest.

Moving those blocks requires a lot of truck trips, however, Clem said, the pre-cast blocks can be created in a controlled environment, ensuring better quality control.

Like the concrete, the blocks will have to come just as they’re needed, meaning there will be a lot of traffic control on West Meadow Drive.

All of the work in a constrained site required a lot of planning, Tyler said.

So far, though, things are running on schedule.

Construction of the exterior structure should be finished in 2019. After that, it will take nearly a year to finish and equip the interior.